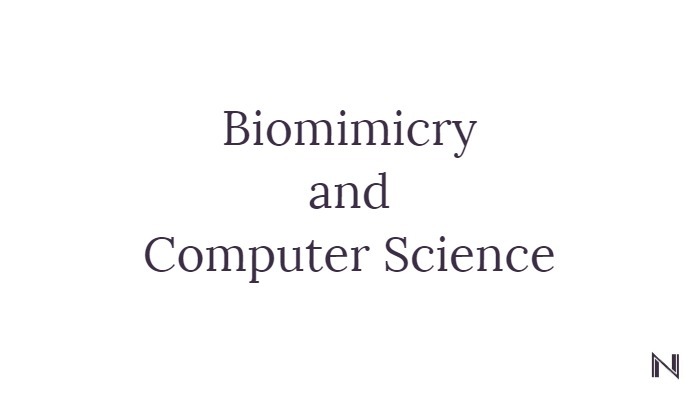 Biomimicry is the art and science of studying the practices of nature and then imitate these processes to solve complex human problems. The central idea is that nature, a consummate engineer, has already unravelled many of the problems we are struggling with. The plants, animals and microbes have found what works, what is apposite, and what lasts on earth.

Many researches are being conducted to solve complex problems in Computer Science using the phenomena implemented by nature. Various problems related to ad hoc networks, network security, packet switching, etc. are being solved using Biomimicry. Taking cue from the netted veins that transport water in a leaf, a team of biophysicists at Rockefeller University developed a model to efficiently deliver packets with reliability in a network. The complex sets of interconnecting loops, as found in leaf veins, provide the optimum solution for the distribution network of varying loads to different parts of the system. A network designed in this manner can handle damage the best.

When ants are under attack by a predator, the ants make signals among themselves and unite to form a swarm and leave scents. These scents in turn guide other ants to avoid the predator. The stronger the scent, the higher the density of the ants responding to the problem. This brings us to the concept of digital ants which, when implemented, protects the computers (or terminals) from viruses and worms in the network. The digital ants when introduced in the network wander through it looking for anomalies. If any strange behavior is encountered, the digital ants leave digital trails (analogous to scents left by ants) to be discovered by other digital ants. A strong digital scent marks severe computer attack and more digital ants are attracted to spot and look into the problem. When more digital ants accumulate a signal is transmitted to the user warning about the attack and he can further take necessary actions to resolve and protect the system.

The nervous system of mammals is varied, with multifarious neuron types, sporadically connected in a complex topology. Scientists have mimicked the way electric signals are sent between neurons in the brain. They have come up with an artificial synapse. The Artificial Neural Networks (ANN), inspired from the biological neural networks in animal brains, can better replicate the way the human brain processes information. This is then simulated in computers and can lead to improvements in brain-machine technologies.

We have to learn a lot from the processes of natural selection and by doing so we might hope to work more sustainably and produce more sustainable products. This could lead to the paradigm shift we’ve been looking for.